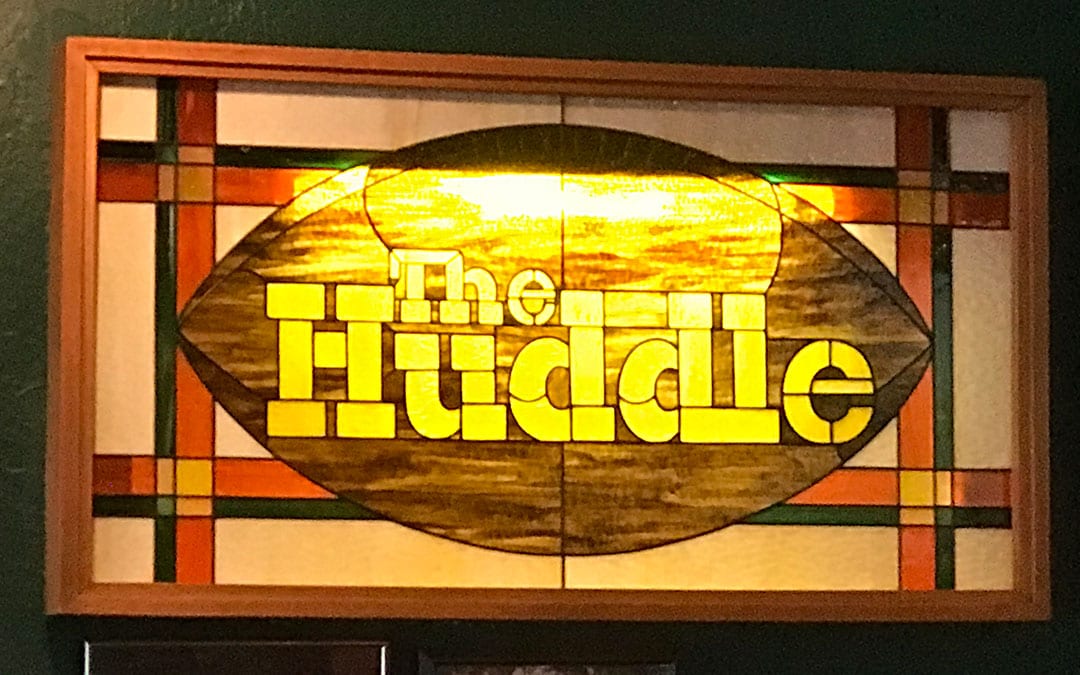 Last night I enjoyed dinner at a gem of a bar and restaurant, The Huddle in the Beechview neighborhood south of downtown Pittsburgh. It’s squeezed in among rowhouses and storefronts, a mechanic and a church. I discovered The Huddle while staying at a nearby Airbnb last Thanksgiving. At that time, I had to order takeout, the place was so packed. I was happy to wait for my food beside a friendly couple seated at the bar. Though they don’t live in Beechview today, the husband grew up there in the 1950s. And from the way the wife told it, it sounded like their evenings at The Huddle are about as regular as their weekly Sunday dinners with their large Italian-American family. The combination of an expansive Pittsburgh menu and the spiritedness of my new friends both had me looking forward to future visits to The Huddle. 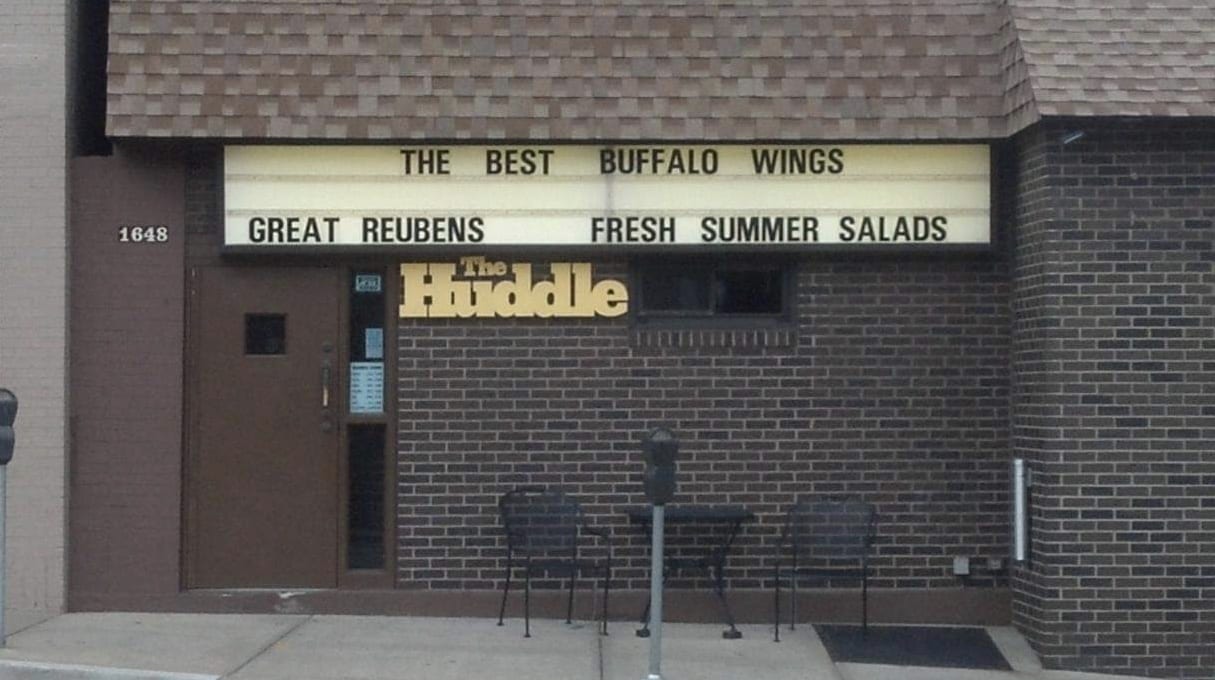 I also appreciated the restaurant’s atmosphere and the sense that it was the kind of place in the sort of neighborhood where folks really live in their community. The Huddle is pure 1970s from the dark brick façade, to the brass railings between the bar and booths, to the faux-leather padded arm rails on the bar itself. This time in, I noticed a trio of guys – two in their 80s and the son of one of them – who’d been at the corner of the bar for a while. They were talking about hockey, classic cars, and people they’ve known their whole lives. I think they and the brusque barkeeps would likely accept the label “Yinzer” with pride. After a decade of marriage to my Pittsburgh-born-and-raised husband and many trips to the ‘Burgh, I can understand the local accent and tend to associate the stronger manifestations with a particularly robust Yinzer culture. At first the accent can sound cold due to the lack of variation in pitch, I think the result of a mishmash of Italian and Irish influences. The vocabulary itself, not just pronunciation and intonation, can also lead to confusion. But the first time I heard someone exclaim “Git ahta tahn!” in all sincerity, I was giddy to hear Pittsburghese in the wild, not as a caricature. Truth is, though Pittsburghers are pretty tough-bred and speak accordingly, they are unassuming and friendly. They proudly embrace their culture, even if sometimes naïve to its uniqueness. 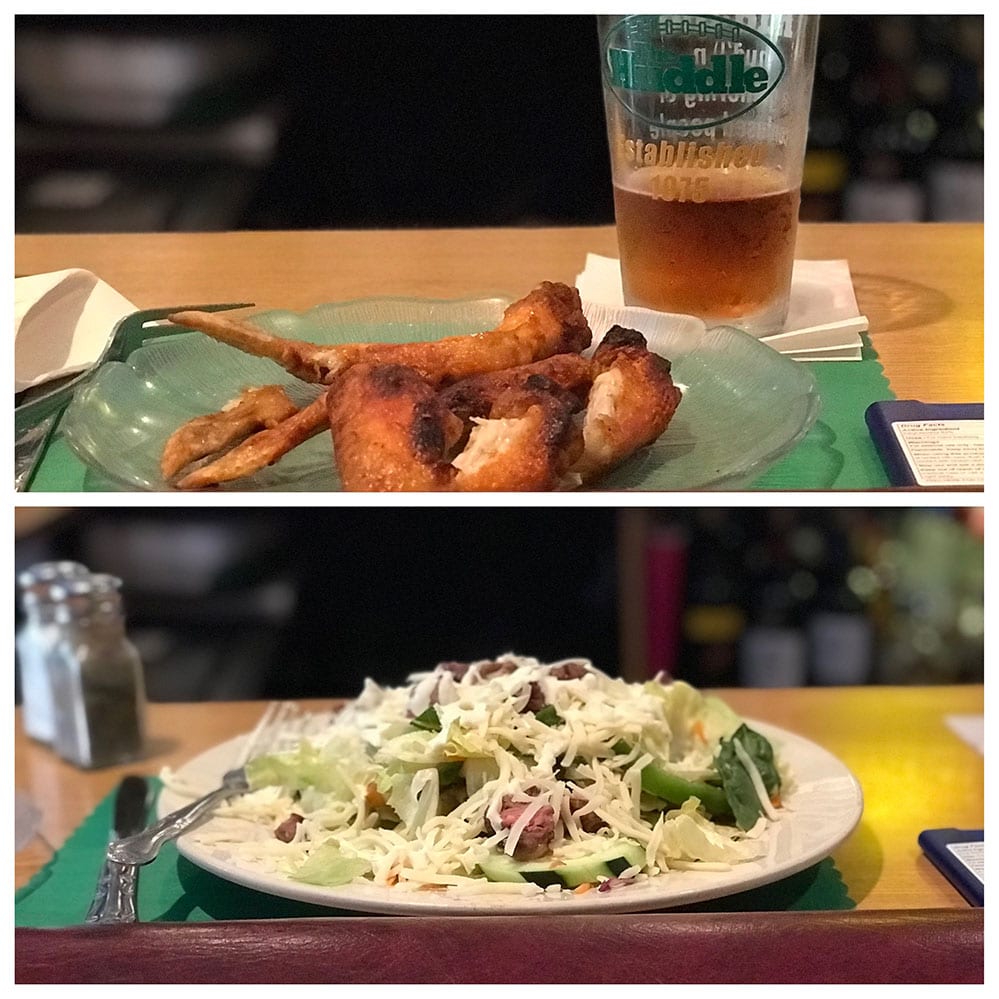 Just one of the special things about Pittsburgh is the steak salad. Yeah, you’ve seen steak salads elsewhere, but not a Pittsburgh steak salad made with french fries. (Pittsburghers also like fries – and slaw – on their sandwiches.) When in Pittsburgh it never fails that, if you compliment the steak salad and remark that they can’t be found everywhere, people respond with a combination of disbelief and sincere sympathy. Last night at The Huddle, my husband and I ordered steak salads and tanned buffalo wings. Tanning, their menu explains, is a process of saucing the wings once more and then broiling them. Seemed to me there may have been some dry seasoning involved too. Whatever it was, it resulted in some of the best wings I’d ever tasted. The steak salads were not exceptional in that they were predictably amazing! The only difference I noticed from other steak salads around the city and neighboring counties was that the fries were on the bottom rather than the top, but the flavors and textures were exactly what we expected and I’ve come to love.

As a social scientist and, frankly, nerd, I usually find myself thinking about a tasty meal or a cool neighborhood as part of a larger story or finding a useful lesson in it. In this case, I couldn’t help but think about globalization and culture. As a Christian economist, I can see a lot of good has come from globalization. While globalization hasn’t been a constant win for the Steel City, the economic growth it has facilitated has been on net and over the long run. Still, I find some of the socio-cultural concerns people raise about globalization and our shrinking world a little harder to confront with pure economic reasoning. One charge against globalization that gives me pause is that it leads to cultural homogenization. I’m a proponent of pervasive nutrition and shelter, for example, but living with uniform cuisine and architecture sounds like a terrible future.

Sometimes I wonder as I travel if I see little bits of that (usually pegged on “Western influence”), but more often I’m reminded that a lot of cultural heterogeneity remains. If I can drive just 7 hours from my home in very-Dutch Holland, Michigan and find a different dialect, cuisine, etc. on a randomly selected block of Pittsburgh, isn’t that a good sign? Pittsburgh salads are perhaps an ideal metaphor for cultural integration – some melding is very good (like when the ranch dressing smothers hot fries that are softening the shredded cheese that sticks to the hard boiled egg), but not so much that each component doesn’t add something that would be missed otherwise. In Pittsburgh you can see the distinct contributions of different immigrant groups, even after many generations, coming from Greece, Ireland, Italy, Poland, Germany, Serbia, Croatia, and the Ukraine, to name just some.

And newer immigrant communities continue to make their marks. Just two doors down from The Huddle is an IGA grocery store. Since Pittsburgh cuisine is not exactly the lightest and there is a lot to learn from exploring the mundane places of daily life, it was nice to walk through the market. It turns out that the IGA was reopened by Hispanic owners just a few years back. While it still carries all the typical “American” groceries, it also features an outdoor tortilla bar (think food truck without the truck), an amazing array of fresh Mexican baked goods, special cuts of meat, and other Hispanic foods. While the Hispanic population in Pittsburgh is only about 2%, the store was bustling and more than holding its own in an established but diverse neighborhood.

I love when cultures meet, combine their best parts, but continue to hold their own. Just this one block of Broadway Avenue in Beechview, anchored by an unassuming neighborhood bar,  is a lovely example of this.